Update: Originally I wrote this the day after I proposed to Ashley on Christmas day 2012. I added the videos of our engagement above and wedding below from Watertown films because it compliments this story. I hope you enjoy it.

Well, I’d like to write about it, so you’re in luck.

I’m 27 and until this year I haven’t had a romantic relationship with anyone since I was 18. In the meantime, I became what I now refer to as a monastic-pharisee. What is that? Well, it’s someone who is into poverty, singleness, martyrdom, and knowledge, and feels a bit superior to those who aren’t. It’s not a particularly joyful, nor a particularly Christian way to live.

About two years ago, I felt convicted about this. I came to see my way of living in conflict with what I found to be true in the Bible and from following Jesus, which as a Christian is something that is important to me. I began to see that I wasn’t being like Christ, who stewarded his resources, sacrificed himself for his bride, lived until he had accomplished all that was prepared for him to do, and humbled himself as a human servant though he was God.

Husbands, love your wives, just as Christ also loved the church, and gave himself for her; — Eph 5:25

Though I had not set myself up for success to find a normal job quickly and a lady, being a monastic-pharisee and all, I prayed that God would guide me, that I would do his will, and that by his grace he would allow me to be more like Jesus.

Then one day I drove from Indiana to Portland. I was planning to attend grad school there. On the way an idea wafted into my mind like a soft whisper, that I would find my wife soon. I waited and looked for a lady. All the while fighting to find a job that would provide, and praying for God to make me more like Jesus.

Time went on, more than a year, and I grew weary and depressed, because I’m not good at being like Jesus. He forgave the people that beat and murdered him, and even died for their sins. I tend to complain when things don’t go my way at any point.

During this season of stupid sadness, I did one thing very well by God’s grace. I found married people I respected, I befriended them, and I learned everything they would teach me. I even moved in with one of them, one of the best to be honest. I’ve been to several theological schools, but let me tell you, there is nothing like the Seminary of Matrimony. That’s what I learned, among many other things. I also invited these couples deep into my life, at that time a dark and depressing one, and I gave them the right to tell me truth when I was believing lies. I basically gave them a license to kick my butt whenever I needed it. There are dozens of them. My butt is still sore….I needed a lot of kicking. Sometimes, I think that’s what God’s grace looks like, especially for a young guy like me.

Then one day, though I had known her for a little while, I found myself interested in this lady. I realized this when I noticed myself working to get everyone to shut up but her so that I could hear her talk more. That’s when I knew I needed to step up or shut up. I went to the couples I respected, the ones that looked like Jesus and who kicked my butt all the time, and I told them of my situation. I didn’t feel right starting something I wasn’t yet in a position to finish. When Jesus put his cards on the table, he was prepared to finish the game. I wanted to be like that. The Jesus-butt-kicking-couples said that I was on the right path, and some of them actually convened on my behalf and then gave me their blessing to pursue when I was ready.

Ashley and I were in the same small group at our church. She is quiet most of the time, so normally I didn’t hear her talk much, but I liked being around her as a friend. Once I joined the small group she was in, I heard her talk, and I didn’t want her to stop. What ultimately did the trick was when I heard her laugh out loud really hard. After that, I realized I wanted to hear that laugh all the time forever. Less than twenty-four hours later, I was sitting down with our group leader and his wife, one of the Jesus-butt-kicking-couples, and told them everything. I made it clear that since Ashley was away from home, I was treating them like her spiritual guardians, and that they had the right to tell me to back off. They had been with Ashley all year and they knew her well. They decided it was best that they let Ashley know I wanted to go on a date, and give her the freedom to turn it down without the embarrassment or shock of having to do it on the spot. It seemed like something that would honor and protect Ashley’s heart, so I was ok with that.

She had actually been interested in me for while. Our first date went really well. We were already friends, but after this date, we were good friends, something that has grown, and that we intend to develop. I told her exactly what I was doing, pursuing her with marriage in mind, that as soon as marriage was off the table for any reason, there was no longer any point to dating for me, that I thought she was attractive, funny, smart, and that she had a clear passion to be like Jesus, the selling point. I gave her a list of some of the key couples who knew me well with their contact information, and told her she could call them at anytime for any reason if she ever felt uncomfortable coming to me with something. I made it clear that I was under authority and accountability, and that guarding her life, purity and heart were my priority. I told her she had an eject button she could push at anytime for any reason, that I was trying to be like Jesus, and he had taken all the risk and hard work upon himself. I wanted to do that, I wanted to be like him, but I needed help so I had an army of Jesus-butt-kicking-couples for backup.

Apparently, when a lady loves Jesus, saying this is like pouring gold into her soul. Jesus had that affect on me, so I took it as a good sign.

It has been the best thing I have ever done. I have learned a lot about how to be like Christ through pursuing Ashley’s heart and learning to love her. I believe it was him who told me where to look, and who brought me across the country to find her. I can’t really take any credit. I was blind until I heard her laugh.

On Christmas Eve, I took a ring that my grandfather had put on my grandmother’s finger long ago, and I put it on Ashley’s finger. 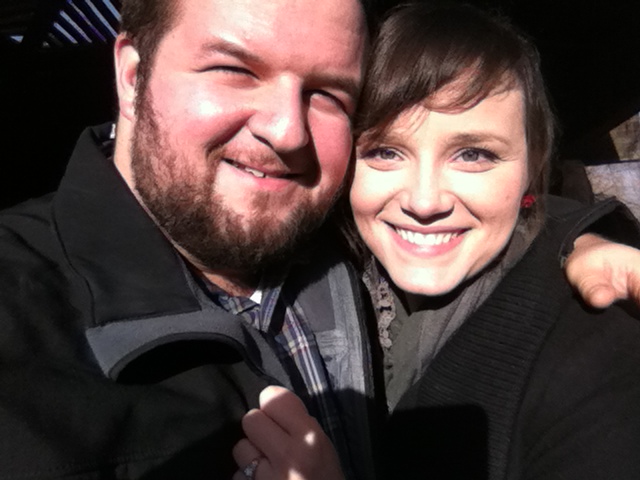 Me and my wife, Ashley, right after we got engaged.

Now I look back at this crazy year, and I see that God has graciously been faithful to answer my underserving requests for a lady and job to provide. He has made this recovering monastic-pharisee a little more like Jesus.

If you are interested in one of the primary books that Ashley and I have found very helpful for our marriage, please check out Tim Keller’s “Meaning of Marriage.”

The Meaning of Marriage: Facing the Complexities of Commitment with the Wisdom of God

2 thoughts on “Would you like to read about my love story?”

10 Reasons why my Dad will be my best man on my wedding day.